Design-forward ideas to help you incorporate beautiful, lush greenery in your homes.

Though planter boxes, window boxes and flower boxes have been around since ancient Rome, they really flourished during the Victorian era and the mid-twentieth century. Built-in planter boxes are not only architectural features of a home, but they also can serve as a space-saving solution (eliminating the need for pots and stands) and provide a permanent garnish of green. And since they were so popular in the 1950s through the 1970s, they bring in somewhat of a throwback vibe. Here is what you need to know about built-in planter boxes, along with ideas for plants to consider. Instead of greenery outside the window, it’s right in front in this renovated apartment. The wood-panelled planter box serves as a backrest for this dining booth while modernizing and optimizing the space. Designer Tami Marlowe of Marlowe Hues Colour and Design says that for her plant-loving clients, living in an apartment without much floor space was a challenge. “Using plants as a feature behind seating meant they were out of the way, can be seen easily and created a green area next to the banquette,” she says.

Mother-in-law’s tongue (Sansevieria trifasciata) is an easy-to-care-for houseplant with near-indestructible qualities. Its upright and erect leaves make it a great choice for this location, where damage to floppier plants could be caused by those sitting in the booth. “They also don’t require a lot of water, hence reducing the risk of damaging the interior of the planter box,” Marlowe says.The planter box was constructed with medium-density fibreboard, and a waterproof membrane was applied with a brush to the interior. Inside, long plastic tubs have drip trays to prevent damage and warping. “LED strip lighting was added to the planter as an additional highlight, as it creates a beautiful ambience in the evening,” Marlowe says.Marlowe also advises against making the planter box too shallow since it needs to have enough space to house plant containers. And, as with any permanent cabinetry, care should be taken not to overwater or spill. 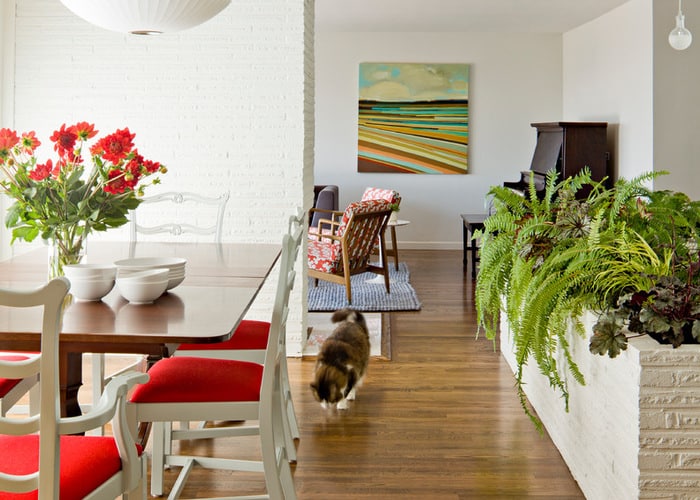 The brick unit dividing the stairway from the dining room overflows with lush green ferns and other plants. With a 1970s feel, it transforms an otherwise staid architectural feature into one that gives vibrancy and life to the space.

The bright green fronds of ferns have an interesting texture and an almost reptilian look. The ferns work well in this planter since they have plenty of room to grow in all directions. They also provide thick greenery to conceal the interior of the planter. The wide window ledges in this sophisticated dining room were designed to accommodate a series of planters filled with elegant orchids.

Orchids are popular houseplants, and they come in a range of sizes and colours. They require shallow planting; moist, well-draining conditions; and bright, indirect light. This stairway wall functions as both railing and bookcase—and since it’s set under a skylight, it has a recess that can accommodate potted plants. “The space had beautiful natural light, and I wanted to maximize the use of the space,” says designer Shadi Khadivi of Shadiworks.Khadivi sealed the interior portion of the wood base with a durable synthetic rubber roofing membrane (EPDM) to provide protection and waterproofing. And she chose plants that require little to no attention, and that appreciate the natural light source above.

Choose a variety of houseplants that grow predominantly upright so as not to be knocked by passers-by. Flowering plants such as peace lily (Spathiphyllum), anthurium, bromeliad and croton will inject colour. Trailing plants like string of pearls (Senecio rowleyanus) and string of hearts (Ceropegia woodii) will cascade vines over the stairway. This modern bathroom has a built-in seat that hosts a planter box with a bed of rocks and mother-in-law’s tongue. It adds colour to the black, white and wood bathroom, and it gets plenty of sunlight from the window above.

Mother-in-law’s tongue can thrive in bathrooms since it can survive in low light levels. It is flexible in terms of heat and water. It is also a great air purifier. This planter box provides a colourful architectural feature that fills the space under the stairs. It softens the aesthetic of the stairs with a variety of plants that can be added to over time.

Philodendron thrives year-round indoors and adapts readily to interior conditions. It is also easy to care for because it tells you exactly what it needs. Place it where it receives bright, indirect sunlight and allow the top soil to dry out between waterings.