Yes. This is still happening. The Renovation Diaries is a week-by-week(ish) chronicle of Western Living‘s editor-at-large as she tackles a fixer-upper.View all Reno Diary entries here.

Remember two weeks ago when I was like It might only be two weeks until I move in?

Go ahead, have a biiiiig laugh at Stacey's expense! Yuk it up! What a delusional moron! She may have an incredible head of hair but she knows NOTHING ABOUT THE WORLD! What kind of absolute fool, after 20 weeks of things going wrong at every turn, would even think about dabbling in optimism? Only someone who has whatever disease Drew Barrymore has in 50 First Dates. (I wish. At this point, being trapped in a never-ending relationship with Adam Sandler circa 2004 would be preferable to continuing with this renovation experience.)

In a way, It's exciting to announce that my notoriously (obnoxiously, depending on who you ask) sunny personality has been clouded, perhaps irreversibly. My glass half-full has been dropped on the floor and smashed into the kind of glass pieces that are like little splinters that the vacuum just cant pick up, and by the way that glass it was half-full of wine and the carpet has not been ScotchGuarded and I will not be getting my damage deposit back. What a freeing experience to be jaded and bitter! Nothing good can or will happen. Clear all wishful thinking from the calendar. The apartment will never be done, and I will live in Surrey forever, and accepting that has really just freed up all the chunks of time Ive been spending frantically trying to make this renovation more efficient. Perhaps I'll take up watercolours? (Or¦ meth?) 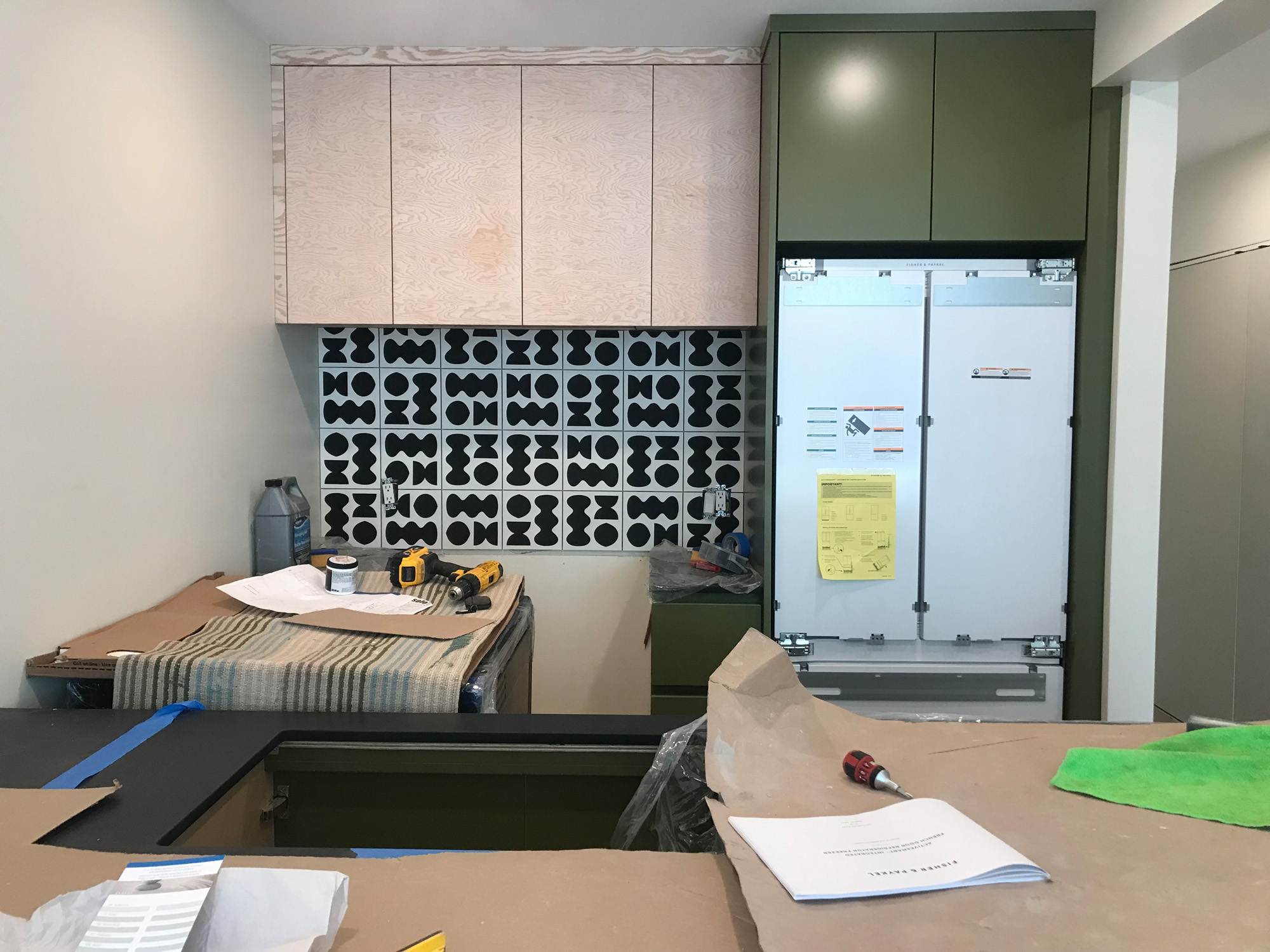 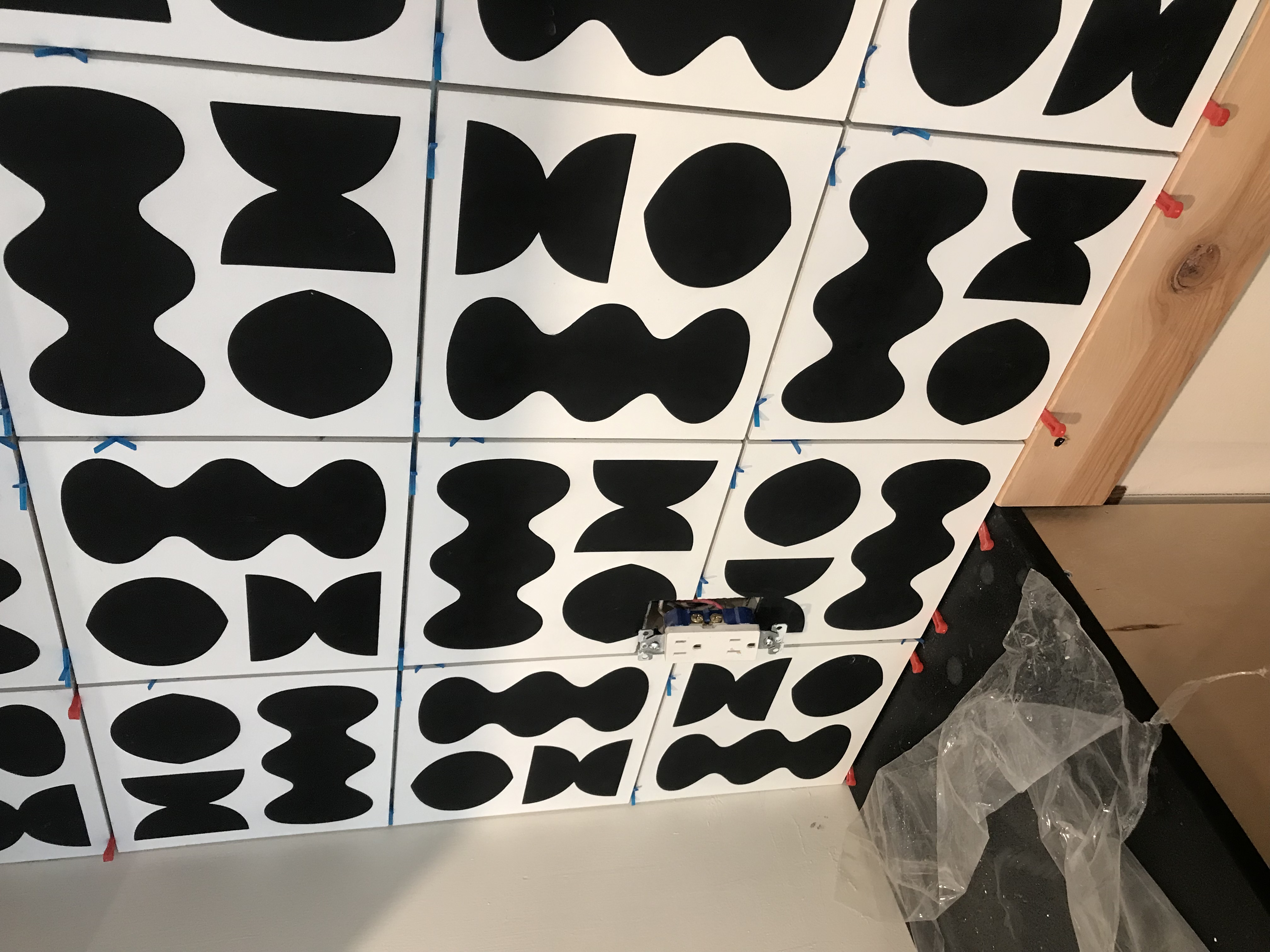 What I'm trying to say is: things have been delayed, pushing our move-in date to an unconfirmed timeline, and it makes my organs feel like theyre boiling. I know everyone is frustrated by setbacks in renovations or other projects, but I like to think that, as an editor who has lived by the rule of deadlines and print schedules for 10-plus years, I feel a unique psychic pain when plans fall through.

The countertop installers showed up only to inform us a cabinet piece was sticking out 1/8th of an inch in the wrong spot, so they had to cut their visit short and the whole rest of the carefully calibrated Week of Progress/Road to Victory we had planned just crumpled before my eyes, like a literal house of cards or the production of the television show House of Cards. So much rescheduling. So many out-of-body experiences, watching myself snap, I don't care who's fault it is: FIX IT like a mean-yet-sexy stepmother character in any 1990s children's movie. (How does Dad not notice she hates kids and just wants to get these brats off to boarding school?!)

I'm also feeling the pain of realizing I am a really materialistic person, and being separated from my precious belongings (rotting in a UHaul crate together on Marine Drive right now) is causing some real strife at this point. I cried the other day because I miss my SodaStream. Like I said: things are getting grim. 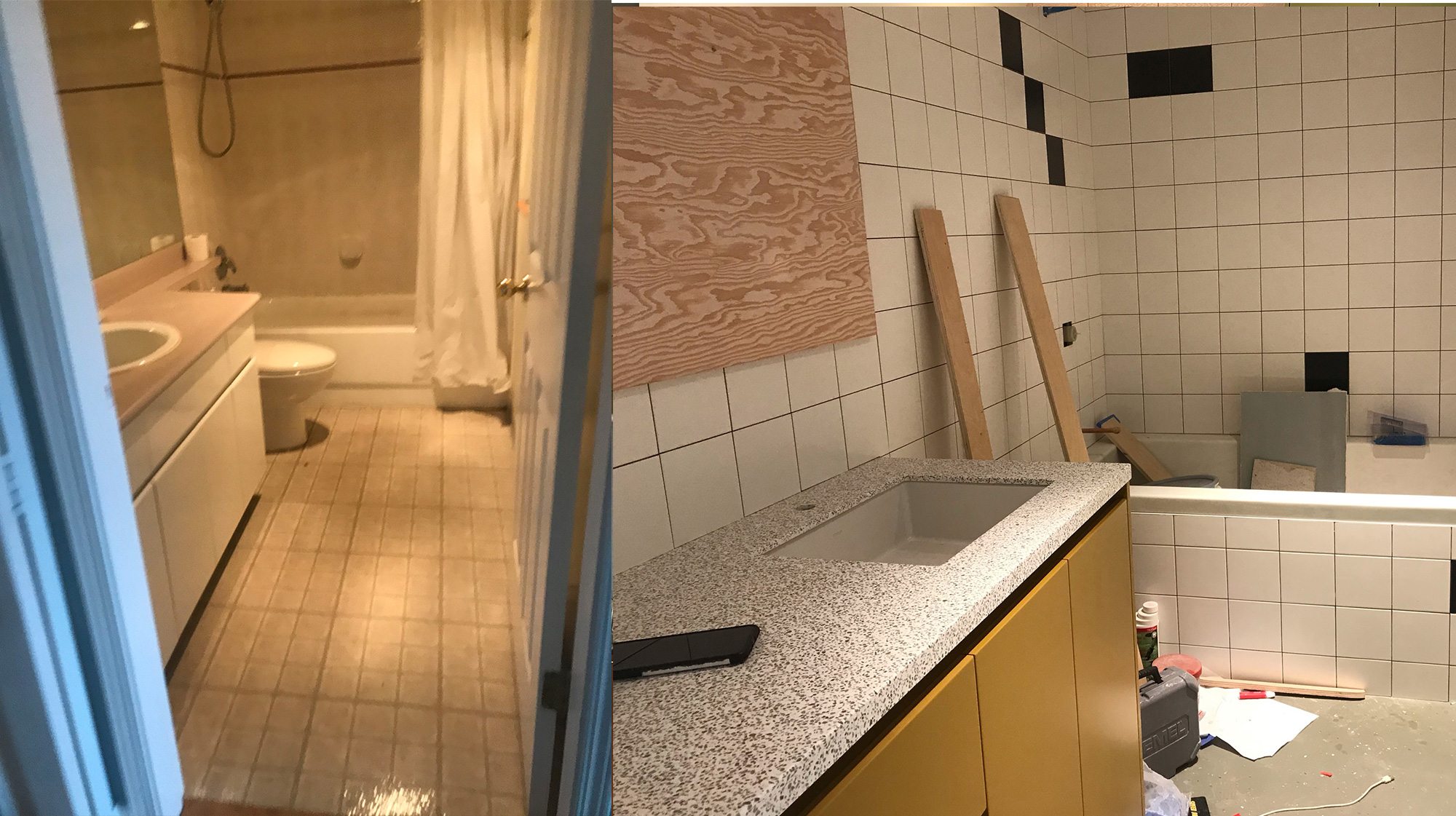 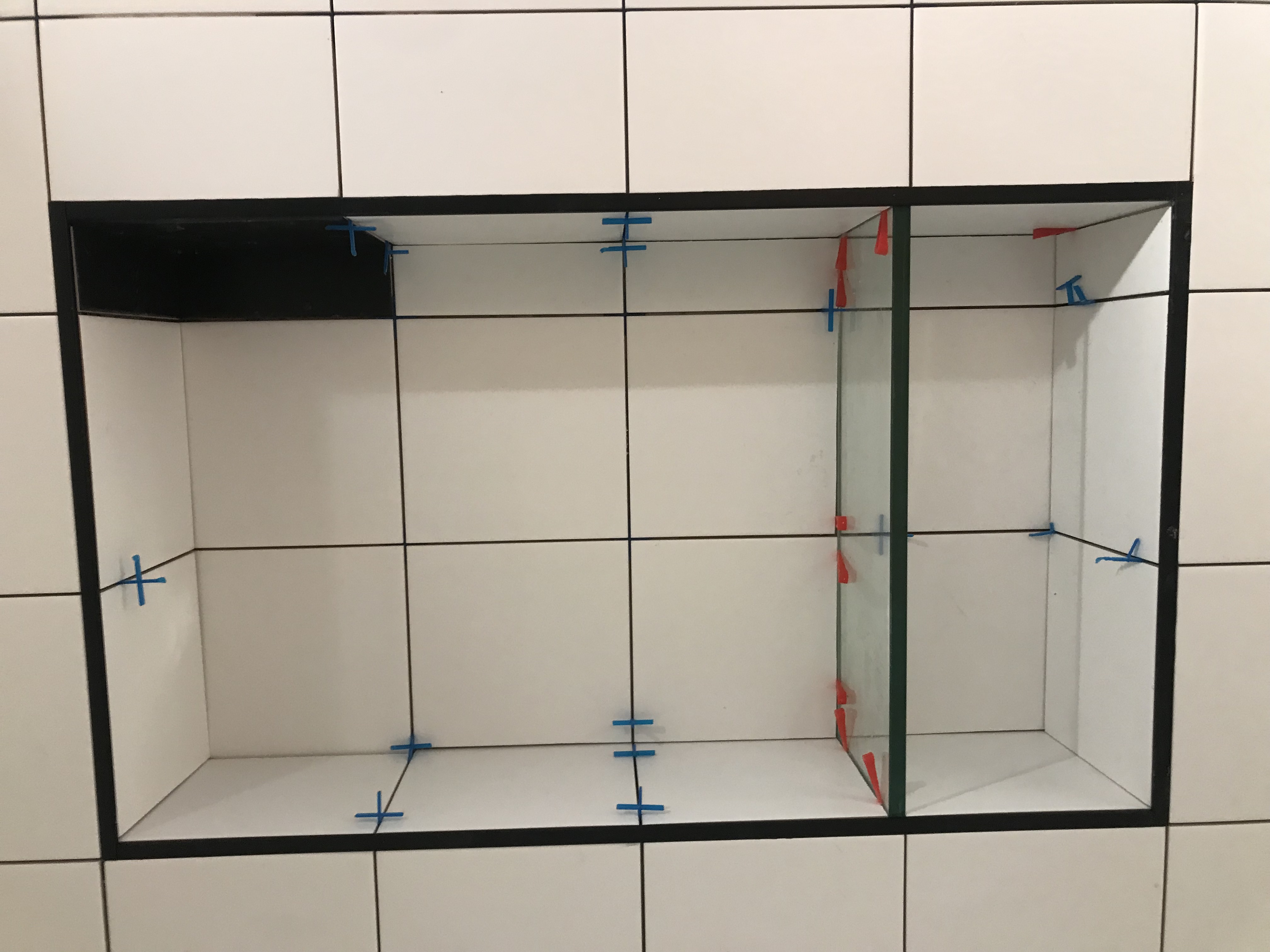 While Ive been wallowing in bitterness, renovation has continued to progress around me. On the DIY front, I contributed to painting the baseboards, a deeply unsatisfying and cumbersome task, while Max and his dad continued to tackle the flooring  only the bedrooms left to go. We also managed to convince our admirably detail-oriented tile guy that we could live with an extra grout line on the floor, so the broken bathroom floor tile issue from that was ruining my life last week has been resolved. He's been busy with a variety of other projects because, as we have realized, we're tiling like 50 percent of the apartment. Between the fireplace and the kitchen backsplash and the front of the tub and the bathroom wall, Tile Guy Dan has probably spent more time at the apartment than we have at this point.

He is doing a bang-up job though, and has a lot of very good ideas about how to make things more practical that we ignore. I told him I would make sure everyone know he advised against the black grout that he believes will highlight the weird size differential in the shower tiles. So. This is me keeping that promise. If it looks sloppy this is no one's fault by mine and Max's. I solemnly swear forever and ever amen.

The appliances also arrived this week, along with the realization that neither the cabinetmakers nor the appliance company were responsible for putting the panels on the panel-ready fridge. A third-party contractor quoted me $700 to do it, so I guess learning how to put on panel doors is a cute new skill I’m about to learn. If you’d like me to do yours, I’ll only charge $600. 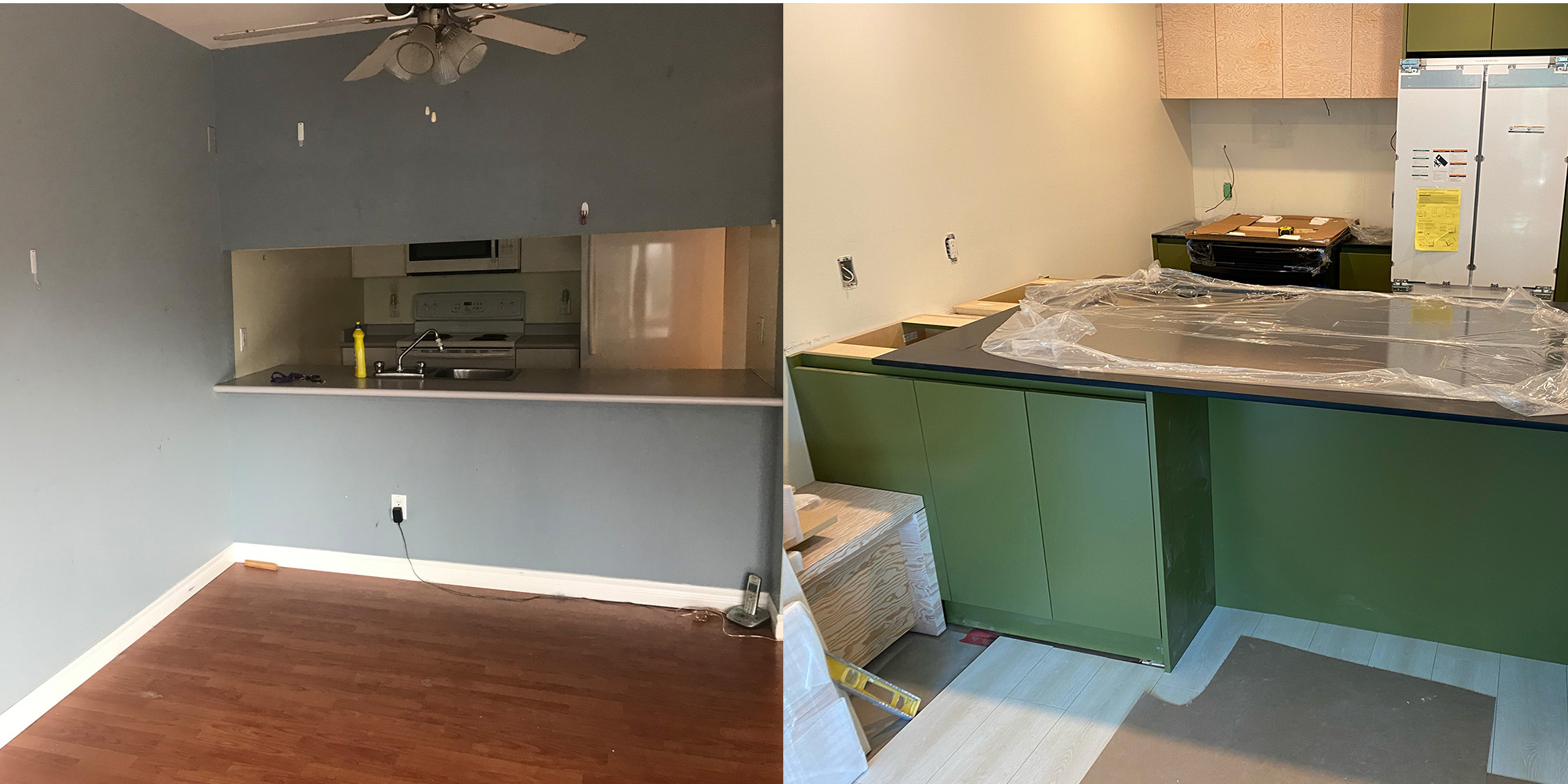 And while the countertop install has been delayed on the kitchen cabinets, the bathroom counter went in without a hitch. She is the light of my life: the reason I keep on waking up every day despite the aforementioned exaggerated despair. Custom terrazzo is basically like your counters are throwing confetti for you every day. It's nice to know that even in my lowest hours, this slab of composite stone is at least bringing the cheer. 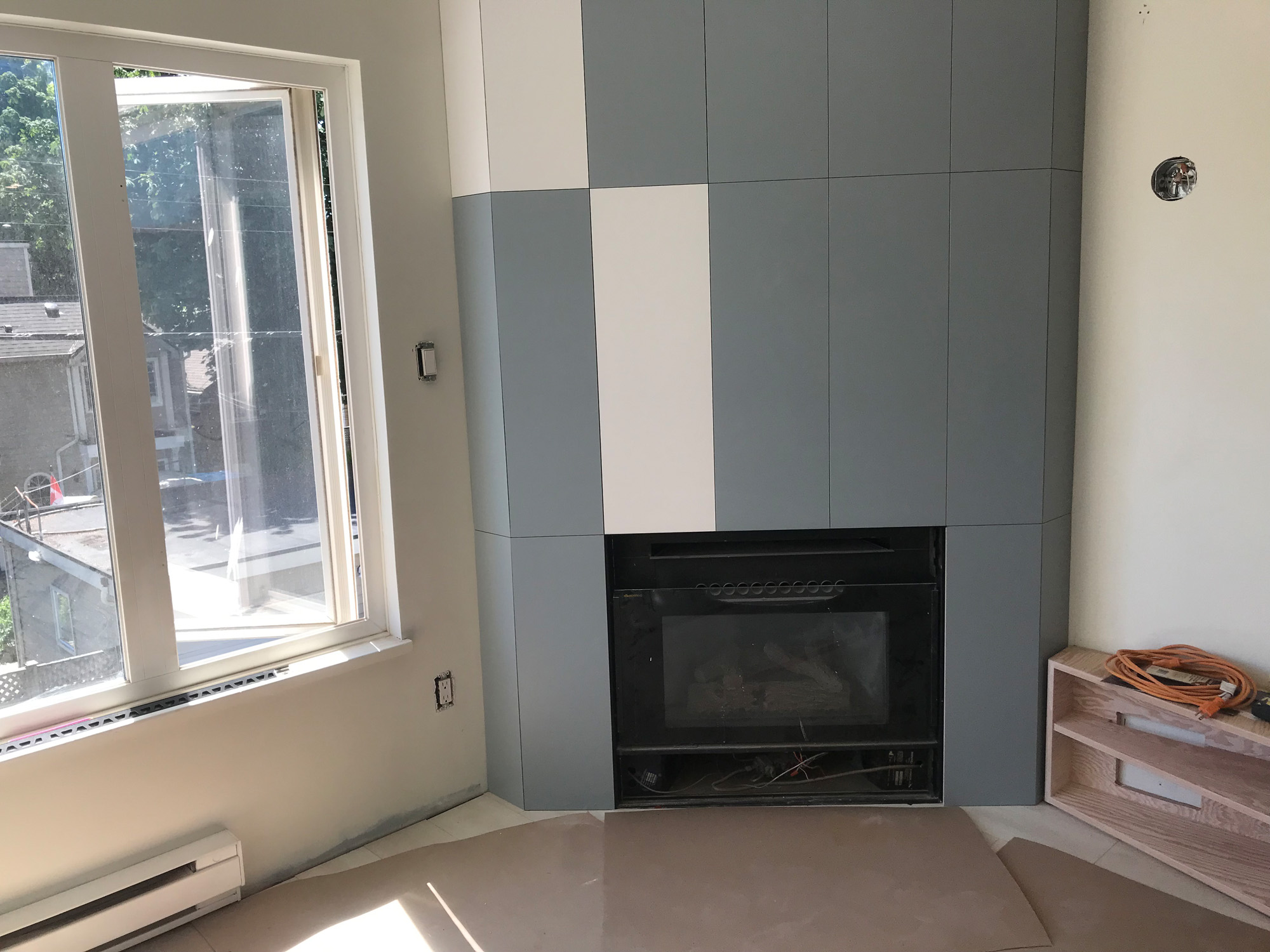 Allegedly we'll finish the grouting and floors this week and allegedly the plumbers and carpenters will come to do the finishing touches on Wednesday but I have been burned before so let's just say: I'll see you here next week.