For the most part, people don't really understand modern architecture. I say this not to be elitist, but to state a truth, one learned over a decade's work at a design magazine: pictures and stories of houses can only ever tell you so much about a building. You might be able to understand the design concepts fostered by Frank Lloyd Wright, but the only people who truly know Fallingwater are the Kaufmann family and some of the lucky friends who stayed there. To fully grasp what the architect was trying to achieve, you have to spend some time within a building's four (and sometimes more) walls; you have to use the kitchen, notice where the sinks are in relation to the shower, and so on. And since most of us don't live in an architect-designed house, we're typically being put at a perpetual dimensional disadvantage.

But sometimes it doesn't have to be this way. I came up with the above thesis on the patio of my room at Victoria's Inn at Laurel Point, the only hotel ever designed by Arthur Erickson and a rare, electric bolt of modernism in Victoria's landscape of grand but staid traditional architecture. In the early 1980s, the propertythen the Deltawas bought by local hospitality magnate Paul Arsens and his stylish wife Arthura (Artie). As luck would have it, the couple was social with Erickson and, with an eye to expansion, they retained the legendary architect to design it. (Story has it that Erickson's retainer came about as a way to pay off a debt owed to Paul from a game of cards, which, true or not, sounds real.) 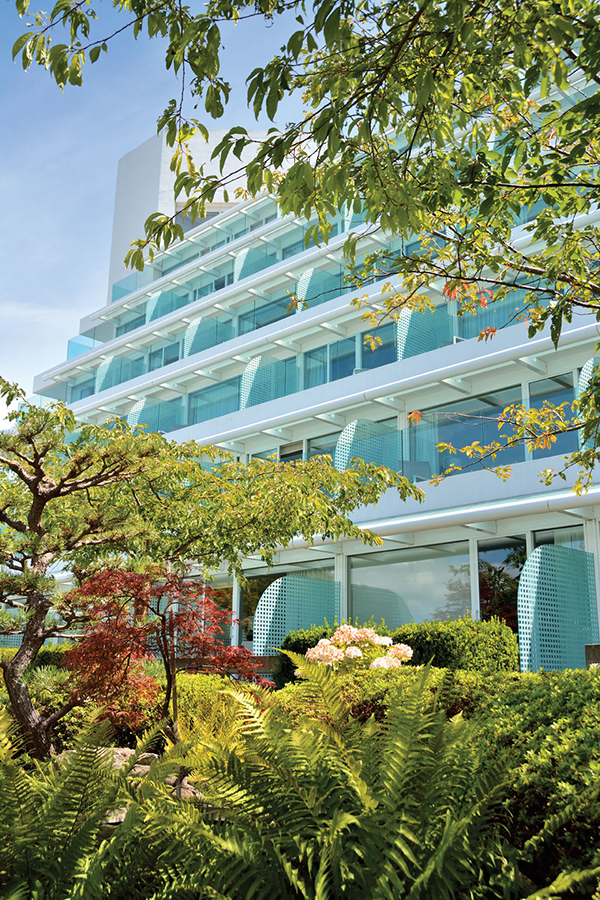 The result was what is now called the Erickson Wing, comprising 65 luxury suites that define the hotel. Erickson's design took cues from the prime oceanfront siting and recalls a ship coming into port. Were Inn at Laurel Point a corporately owned Hyatt or the like, Erickson's work no doubt would have been covered over numerous times by now, with the requisite refresh that's part of the playbook for a high-end chain hotel. But the Arsens never went in for such slavish acts. Perhaps it was out of deference to their friend, but my guess is that a guest of Room 404 in 1987 would still very much recognize the same room today, notwithstanding that the entire place was overhauled in 2019. That's because the Erickson rooms still have the hallmarkstatami doors, light wood, muted tones, plenty of textureof the master. The hallways, many of them housing the Arsens art collections, are the largest Ive ever seen in a hotel. No actuary would ever approve such a design, featuring space that could be used for revenue instead being earmarked for… aesthetics. But they do force a guest's perspective to shift from a wide expanse (the aforementioned hallway) to a narrow one (the entrance to the room) to an even wider one (the stunner of a view of Victoria Harbour that Erickson insisted every room have).

Staying here puts you in a mind for modernism, and there'sthe rubthe Inn at Laurel Point is a thoughtful beacon in a city literally named after the most conservative architecture style of the last two centuries (which has its own charms as welljust different ones). So, I started to plot walks that brought me from Inn at Laurel Point to other likeminded buildings. Id say it took a long time, but the truth is it didntthere'snot a plethora to choose from. It's a 5.4-kilometre loop that'll take you an hour, but one you can pick and choose from if you've out and about.

Here’s some more examples of stunning modern architecture in Victoria: 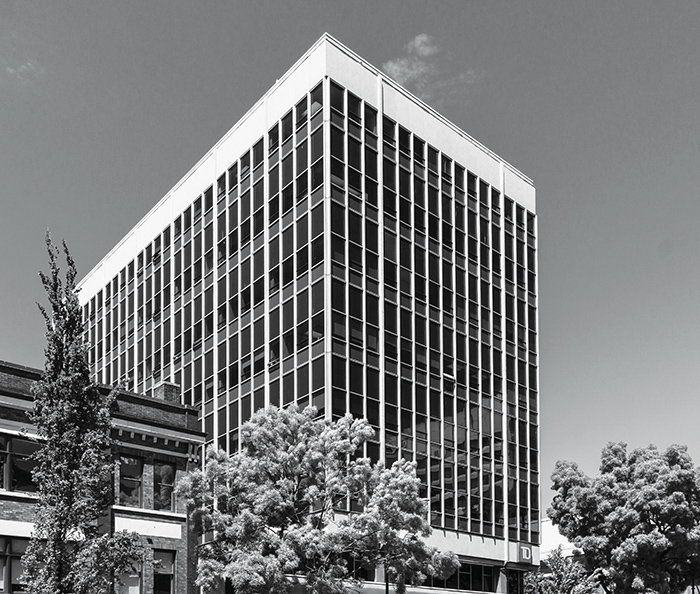 I'm hesitant to put this Mies van der Rohe knock-off on the list (designed by the construction company's in-house architect) because, unlike Inn at Laurel Point, it makes zero attempt to fit in with its surroundingsunless its surroundings were midtown Manhattan circa 1957. But it is modern to a fault. 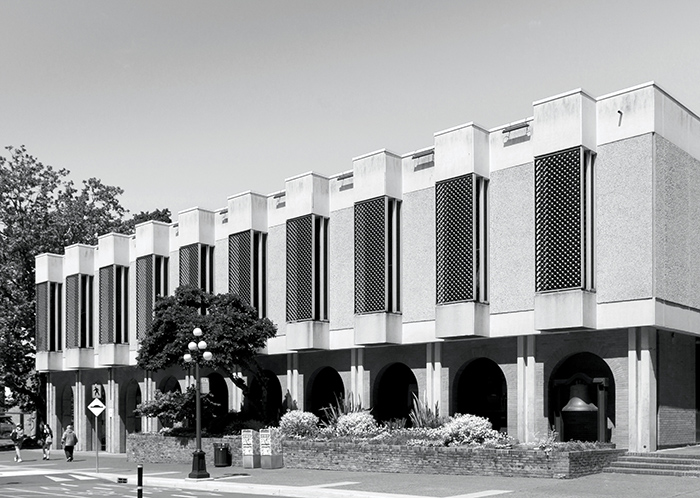 It's sorta International Style, but with lots of mostly ornamental arches and beautiful stylized brass screens on the second-storey windows. Designed by local firm Wade, Stockdill, Armour and Partners. Weird and wonderful. 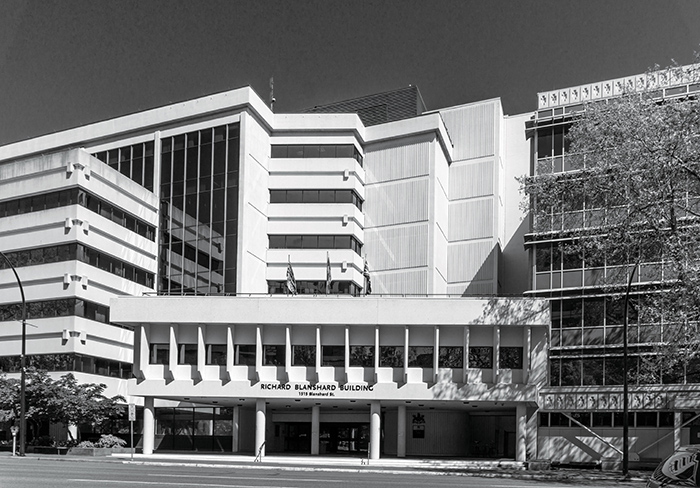 Now we're getting to it. Just a few blocks north from City Hall Annex, the former BC Electric Building was designed by Ned Pratt of Vancouver's Thompson, Berwick and Pratt (with an alleged assist from partner Ron Thom). Here we get some soul and flow going, with the aquamarine notes juxtaposing the white forms at the entrance. Has been subject to some iffy renos, but the quality still shows. 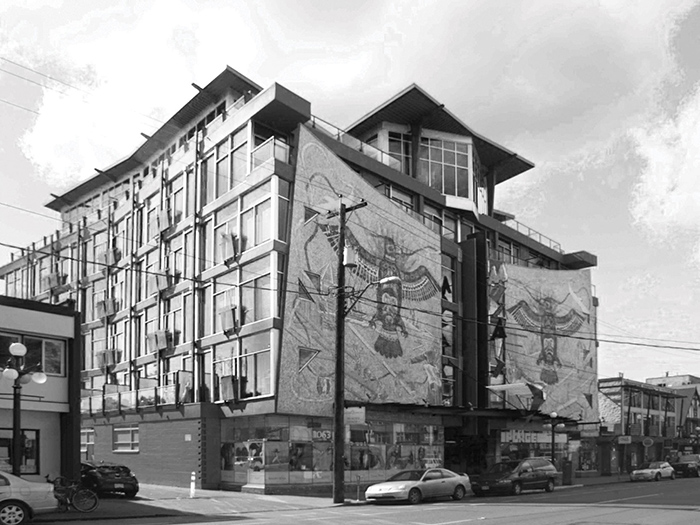