What does the perfect winery look like? Well if you've trying to make world-beating pinot noir, it probably looks something like Kelowna's new Martin's Lane. 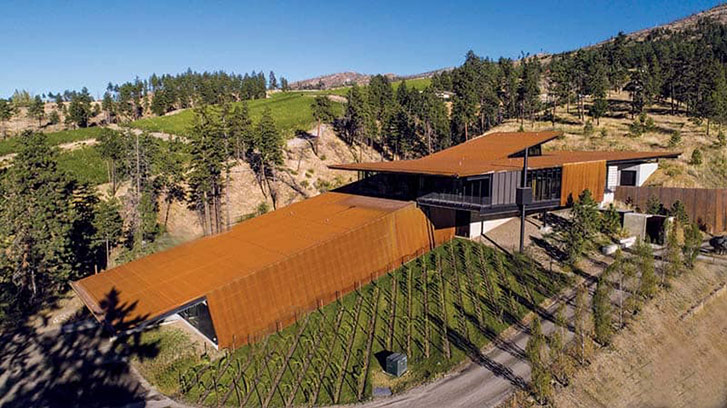 All hyperbole aside, you’re looking at arguably the most advanced winery in North America. It’s for Martin’s Lane, Anthony von Mandl’s boutique producer of high-end pinot noir and riesling. And while it’s nestled beside its sister winery of CedarCreek, it’s fair to say it’s like nothing the Okanagan has seen before. The project reunites von Mandl and Seattle architect Tom Kundig, who teamed up a decade-and-a-half ago to set the original benchmark when they created Mission Hill. And whereas that winery more or less created wine tourism in the Valley, this one is focused on only one thing: crafting the perfect building for making a pinot noir that will stand shoulder to shoulder with the elite wines of the world. The project saw Kundig tapping into the gravity that flows from the site’s steep slope on the east bank of Okanagan Lake. Grapes will arrive at the top of the six-level building and, as they get destemmed and carefully crushed and start their journey toward becoming wine, they’ll gently make their way to the bottom level, never being manhandled or mistreated by the harsh hydraulic pumping in use at most other mortal wineries.

But just because functionality rules doesn’t mean there’s not beauty. Kundig has mined the entire ethos of the place, mirroring the site’s burned trees (from the 2003 Okanagan fire) in the cladding and having curtain walls slide away to expose one of the great views of the Valley to create a building more akin to a Richard Serra sculpture than a conventional winery. If you can describe a 35,000-square-foot building as light on its feet, then this is it. “For several years, Tom Kundig and I had been talking about a concept for a radical new winery, carved deep within a steep, rocky hillside to harness the effects of gravity to produce high-end pinot noir. Then something incredibly unexpected happened when Mission Hill won the ‘Best Pinot Noir in the World’ trophy at the Decanter World Wine Awards in London. This was the catalyst for the creation of Martin’s Lane Winery, the most advanced six-level, 100-percent-gravity-fed pinot noir winery in the world.”—Anthony von Mandl, Owner “The main idea of Martin’s Lane was to embrace both the landscape and the nature of the gravity-flow winemaking process taking place inside. Utilizing the downhill grade, the building falls along the topography of the land where the production happens, while the hospitality portion of the program cantilevers out over the landscape, opening the space to Lake Okanagan, the vineyards and the mountains beyond.”—Tom Kundig, Architect “Elegance and character in combination with site expression are primarily what I look for in any wine. Winemaking should not only be detailed and uncompromising but mostly gentle and guiding. I’m not a big fan of the term non-interventionist. I prefer minimalist.”—Shane Munn, Winemaker