Vote for this “Natural Beauty” in our 2021 Home of the Year Awards! Deadline is midnight, December 14.

1974 was a good year. This post-and-beam Lions Bay home was built, and the designer who would eventually give it a glorious modern makeover was born. The homeowners, John and Tyler, were taken by the mid-century feel and community vibes of their Lions Bay house, but the property was in need of a little love. The four-bed, three-bath, 2,800-square-foot house had been updated in a piecemeal way over the years (like the high-gloss kitchen), and the layout was awkwardly segmented by support columns. The lighting on the main floor was subpar too  a common issue for post-and-beam construction, where there'sno place to hide wiring in the ceiling. But 1974 baby Lori Steeves of Simply Home Decorating wasnt daunted by the challenge. She pitched John and Tyler on a cosmetic renovation of the main living spaces and a total kitchen overhaul, and got to work turning the quirky house into a home the couple could love for decades to come.

An awkward closet was swapped out for a stunning library wall, and support columns firmed up with chic industrial brackets. Steeves reduced the exposure of the kitchen to create a more welcoming entryway. It was important to provide a sense of arrival at the front door, she says. This was one step in improving sightlines, visually connecting one space to the next. In the kitchen, we opted for an unconventional colour for the cabinetry, but one that would tie into the natural colours from the surrounding views from the outdoors, says Steeves. Black hardware makes the perfect finishing touch.

The original oak hardwood throughout was refinished with a custom white washed finish, and many of the furnishings from Once A Tree Furniture (the library shelving, dining table the sofa table) were finished to complement it. Overhead, cedar planks and a layer of shiplap on the ceiling allowed for wired pot-lights and a new dining fixture, while still embracing the home's original character. While a home theatre room is kitted out for a comfortable TV-watching experience, the window in the living room has proven to be as much of an attraction for John and Tyler. They find themselves parked at the dining banquette as often as in the Once A Tree swivel chairs that look out onto the stunning ocean and forest view, says Steeves. 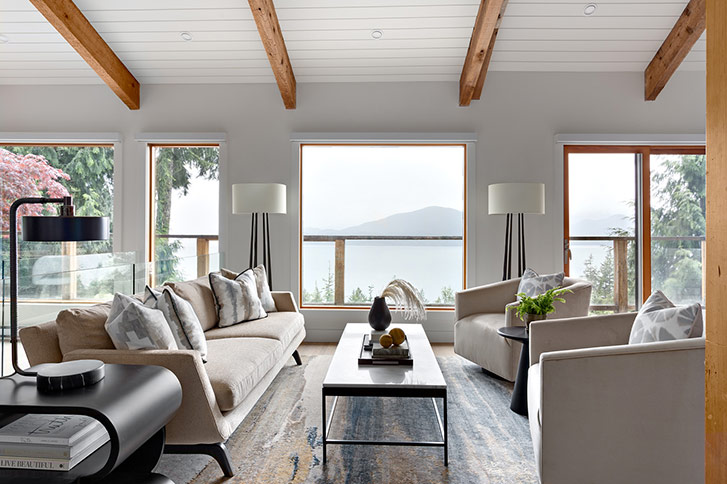